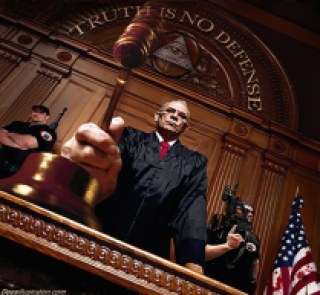 When I feel a little like writing more vanilla….. The magistrate sat in his hand carved chair looking down on the crowd in his court.  A raven had been carved into the oak chair specifically for the magistrate. The magistrate favored the raven above all other birds.  No other magistrate issued the death sentence as often and with such thrill as this man sitting upon the pulpit.

A woman stood before him, her hands bound in shackles before her.  The crowd of angry villagers pushed from behind her to get a glimpse of the woman.  The length of her black hair rivaled that of the fairytale princess Rapunzel, but this was no fairy tale, and this was no princess.
The woman stood before the court accused of atrocities against men.  Leading them to her cabin in the north woods and keeping them trussed up for her pleasure.  Married or single, made no difference to her. Father or brother held little meaning in her mind.
The tale went told that she lured them from the warmth of their beds with the promises of love and warmth in her arms, and between her legs.  Her well rounded breasts filled her chemise, which she wore upon visiting her victims.  She would blow gently towards their windows, waking them from their slumber. A few  soft spoken amorous phrases and the men unwillingly followed her from their cottages to her forbidden cabin.
Once inside she would remove her chemise and lure them to her bedroom.  The men stood agape at the threshold of her room. The orange hue of the flames from the fire danced upon her skin as she moved her hips and arms in rhythm to a song she hummed. The men, mesmerized by her beauty, could do little other than stare as she made her naked body move in ways they never imagined a woman’s body could.
She danced with a scarf, the tale is told, and then two and three. Each she used to titillate the senses of the men, and seduced them to remove their clothing. Once naked, she gently caressed their hands and their chests, drawing them closer to the bed.  She kneeled on the bed, smiling all the while, and invited them to join her. Enthralled with the scent of lust and promise of fulfillment the men were left with no choice but to follow her cues.
What followed was beyond the control of the men. Her wickedness reigned down upon them as they suckled her breasts, ran their hands over her thighs, and parted them.   They were helpless as she took them in her mouth and caressed them with her tongue.  The liquid heat drove them to madness, forcing them to push her down on the bed and thrust their hardness into the very warmth they sought.
She stroked their backs as they writhed over her, pushing and grunting with all the pleasures of the devil.  She smiled up at them as they dug their hands into her hips and drove into her forcefully.  Her legs wrapped around them as they found their release. She made no complaint that she had not found hers.
She kept the men until breakfast, fearing for their very lives- the tale goes. She fed them a hearty meal and sent them back to their homes.
The wives of the village feared for the very safety of their husbands. They banded together and forced their way into her home.  They bound her wrists, pulled her from her kettle, and dragged her to the village to face her charges.
The woman with the raven black hair stood before the magistrate, not yielding to the accusations being flung at her.  She remained firm in her silence and her beauty. Beauty could not have been granted to this woman by the grace of God- to be so evil and wicked with the innocent men.
“You are found guilty of bewitching these men. Creating harm to their families and being as wicked as the devil himself.” The magistrate decreed, removing his hand from his groin.   “I will need to spend the evening speculating on your punishment.” He stood and made his way to the exit, leading to his personal chamber in the back of the hall.   The crowd jeered the woman who remained motionless at her bench. “Bring the little wench to my chambers.  I’ll need to understand the nature of her crimes before properly punishing her.” The magistrate instructed the guard at the door before entering his private room.
The woman finally made a movement. She slowly looked to the magistrate’s closed door and smiled, a serene, graceful smile.